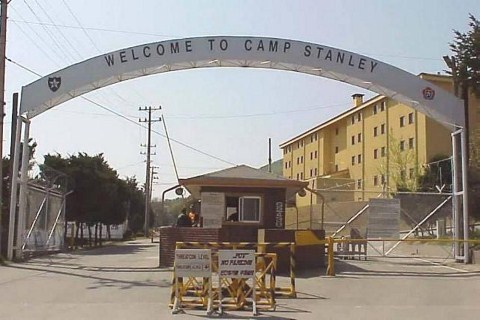 In these last few posts, I am talking about the training I was able to do while I was stationed in Okinawa, Japan! In the last post, I talked about training in the Philippines. This post will talk about training we did in South Korea.

Sometime around March of 1989, my unit participated in Team Spirit which was a joint/combined exercise designed to evaluate and improve the interoperability of the ROK (Republic of Korea) and U.S. forces (thanks Google). In-country forces were augmented for training purposes by U.S. Army, Navy, Marine and Air Force units from outside the ROK. It was always something we looked forward to because it was one of the longest times we would be deployed to the field to train. We also looked forward to liberty in Korea. While this was a large training operation that took place all over Korea, the majority of our time was spent around Pohang, which is on the coast, southeast of Seoul.

While life in the field is pretty monotonous, there were a few memories that I have of my time there that I will share here.

We flew from Okinawa to South Korea in a C-130 cargo plane. C-130’s were our usual mode of transportation from Okinawa to where-ever we were going to train. Most times, we rode in the regular C-130, but a few times, we rode in KC-130’s which were equipped with a removable 3600 gallon stainless steel fuel tank that would be used as extra fuel when required or also to refuel helicopters. It is a sight to be able to watch refueling operations out the back of an open aircraft.

I am not positive where we initially flew, but it had to be close to Pohang. We staged our gear for further transport to our main camp. I can’t remember what I did, but somehow, I got in trouble before we left and so I was the designated gear-guard, while everyone else got to explore the base. My platoon was selected to go to train with the Army at a base north of Seoul called Camp Stanley. We were supposed to have a helicopter take us up north to Camp Stanley (의정부시) but our transportation didn’t come, so we did what Marines always do. We adapted to our situation. We changed into civilian clothes and then carried our sea bags with the rest of our clothes to the civilian bus station and purchased tickets to Seoul. It was quite a ride. I’m sure the Korean citizens on that bus with us thought we were crazy.

Once we arrived in Seoul, we walked to a hotel and I believe we took every room they had available. I don’t remember much of that night. I remember that we arrived late and there wasn’t time to get food. I believe we each had an MRE to eat that night. I do remember we got a little time in Seoul to get food. We went to the Kentucky Fried Chicken place because that is all we knew.

The rooms were small and not very well lit, but it didn’t matter because as cold as it was outside, inside the rooms were toasty. They had heated floors and everyone walked around without shoes. I remember they had one small bathroom at the end of the hall that we all had to share. The next morning, the hotel gave us each a towel that had the name of the hotel embroidered on it. I still have the towel in the original paper bag they gave us.

Our platoon commander was the same Lieutenant that I had the previous run-in with. (Now that I think about it, that might be why I was put on guard duty) He was able to procure two civilian vans and we loaded ourselves and all of our gear into and on top of the vans and we drove up to Camp Stanley to do some AAAAArmy training! They had a Moving Target Simulator (MTS) there that we could use to practice aircraft tracking. It also enabled us to train with our Army counterparts. Since the base was close to the DMZ with North Korea, we studied the aircraft that North Korea flew. I believe we spent at least a week there. Every night, we got liberty so we were able to explore the local drinking establishments while we were there. It also enabled us to taste the local food. I had never had Korean food before so that was an experience!

When it was time to return to our main base, we had a CH-53 pick us up to takes us back. On the flight back, the crew of the CH-53 told us that they had to stop in Seoul to pick up some spare parts for another helo that had mechanical issues. As we were flying over Seoul, the pilot flew over some of the stadiums from the 1988 Seoul Olympics. I took some pictures of the stadiums looking out the back of the helo to the stadiums but I can’t find those pictures. It was a site to see! Eventually, we made it back to our main camp near Pohang. There we were assigned hard-back tents with oil heaters because it was cold. We were still waiting for our large gear locker to be delivered so I had to stand guard duty in regular boots. It was cold and raining and my feet got mild frostbite. Standing in the cold rain without any winter clothes was tough. I never want to be that cold again!

One of the coolest things I was able to do is go to the Mountain Warfare School. My unit (LAAD) could be attached to any other type of unit (infantry, heavy weapons, recon, artillery, etc) to provide air defense for that unit. Our main weapon is the Stinger Missile and we shoot that from the ground, so wherever we need to go to complete that mission, we must be able to get there. The two day school was challenging and fun. We spent the first day learning different rappelling techniques, then we actually perform them the afternoon of the first day and all day on the second. First on a 300 foot cliff and then Australian rappel (face first) off a 120 foot rope bridge. We ended the training with a 750-foot slide for life (twice!).

I don’t remember any more specifics about the training that we did, but I do have random memories of that Team Spirit:

Team Spirit was a pretty long training exercise. I think we were there for about 3 months. The longest deployment I had was in 1988. I deployed as part of MAGTF 3-88 to the Persian Gulf. That lasted about 9 months and will be the subject of the next few stories. Stay tuned!