I was watching FoxNews.com today and saw an interview with John Rich (of Big & Rich). He wrote a song for John McCain called, Raising McCain. He is making it available as a free MP3 download at http://www.johnrich.com and you can watch it here:

I just listened to JJ Heller’s new album. Great sound. She is giving away her new album until November 1 so download it yourself and listen!

I know I did this once before – but this has to be one of the best Beat-Boxers I have ever heard! It is just amazing!

I am always amazed by beatboxers. Here’s a contestant on a French “American Idol” program. Just amazing…

Do you hold a preconceived idea of what worship is? How do you worship?

The other day I experienced one of the most enjoyable worship experiences that I have had in a long time. I was at the gym, getting ready to start my 28 minutes on the elliptical trainer. This is a special 28 minutes because I use that time to talk to God. Most of the music I have on my MP3 player is Rock & Roll. Most with a Jesus theme and the rest is old stuff that I grew up with. On this particular morning, the first song in queue was by Iron Butterfly. Yes – you know it as the 17 minute rock classic, “In-A-Gadda-Da-Vida“.

The words are simple:

That’s it. They sing the words at the beginning of the song and at the end of the song. In between, is about 15 minutes of instrumental guitar solos, drum solos and organ melodies that remind me of “God Rest Ye Merry Gentlemen”. Anyone who was ever in a marching band has played that drum solo. The main riff of the song is instantly recognizable.

That morning, it was perfect praying music. For seventeen wonderful minutes, I was walking with my God in the Garden of Eden. I was talking to Him. He was talking to me. I told Him about my kids and my hopes and dreams for them. I told him about my wife – even thanking Him for providing such a wonderful woman to spend my life with. I thanked Him for giving me great parents and grand-parents. Great examples of lovers of Jesus. I thanked Him for my job and for opportunities to show Jesus to others. I asked Him to help me be a great husband to my wife and a great Dad to my kids. It was a great conversation.

Wondered why I called this post “Worshiping In The Garden of Eden“? 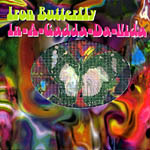 Wikipedia says, “A commonly repeated story says that In-A-Gadda-Da-Vida’s title was originally “In the Garden of Eden” or “In the Garden of Venus” but in the course of rehearsing and recording singer Doug Ingle slurred the words into the nonsense phrase of the title while under the influence of LSD. However, the liner notes on ‘the best of’ CD compilation state that drummer Ron Bushy was listening to the track through headphones, and couldn’t hear correctly; he simply distorted what Doug Ingle answered when Ron asked him for the title of the song (which was originally In-The-Garden-Of-Venus). An alternate version of the story, as stated in the liner notes of the 1995 re-release of the In-A-Gadda-Da-Vida album, states that Ingle was drunk when he first told Bushy the title, so Bushy wrote it down. Bushy then showed Ingle what he had written, and the slurred title stuck.”

Little did they know then, that for me, they would record one of the best worship songs in years!

I am a Christian

I argue, I fight

I curse, I swear

I fall, I rise

I walk, I stumble

I hurt, I feel

I anger, I haste

I never will
I am a Christian.

I am trying to be like my idol
Jesus Christ.

Jesus saved me
I was lost,

I am trying to repay him
But I fail everyday..

Because I always forget

He already paid my debt

That’s when The Holy Spirit reminds me
And then

I am a light in darkness
I am strength to the weak
I am an inspiration to my brethren
I am life, I am Hope, I am Love,
When I am in Christ and Christ is in me
There is no stopping the plans he has for me!

When I am not..
I fall short
He forgives me still
I pray you will because
I am a Christian and
I have some big shoes to fill

Author : Michael Gomez
(Reprinted here by permission – Thanks Michael)
(Read more from Michael and listen to some of his great music at www.myspace.com/thelosttruth)

I was stoked to get permission from the band Downhere to include one of their songs as part of this podcast. Thanks Jeremy!

If you are interested in picking up Tenth Hour Calling’s CD you can get one at their website http://www.tenthhourcalling.com.

We’re beginning a new worship service on the first Friday of every month at our church. Tonight is the first one. Here is a promo video I made for it. If you are interested in attending, come to Grace Community Church. Call 402-492-9111 for more information.